On 21 September 2019, join us for a one-day festival to celebrate the International Day of Peace and learn more about the urgent issues of peace and conflict around the world. 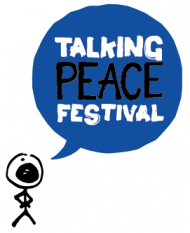 We’re teaming up with other leading peace organisations around the world to host a day of film, food, art, music, photography and talks showcasing the impact of peacebuilding. The festival is a collaboration between Conciliation Resources, International Alert, Saferword, Peace Direct and Mercy Corps. It will be the UK’s flagship event for the first ever global Peacebuilding Action Week, run by the +Peace coalition.

Where? Flat Iron Square, a cultural hub in London Bridge.

How much? Most events are free, but some do require advanced booking. Explore more below.

Showcasing portraits and the stories of Colombian women who are now living in London but contributing their voices to the ongoing Colombian peace process. All the women are part of Diaspora Woman, which uses the collation of testimonies, as well as art, music, cooking and community, to heal past trauma and contribute to the collective memory of Colombia. Organised by Conciliation Resources. No need to book.

Mercy Corps is using virtual reality (VR) experiences to help Syrians reconnect with and discuss the heritage of their homelands, as well as that of their host countries. During the festival, attendees will be able to interact with the VR and find out more about the project and its impact. No need to book.

Join this folk dance workshop and learn how to dance a simple but traditional Syrian Dabkeh. You will also get to know more about its history, why it was created, how it reflects the peaceful values of the Syrian community and how it is being used today to bring people together. BOOK HERE.

Spray Peace has been founded with the aim of promoting values of tolerance, peace and equality through different forms of art. This stencil making workshop provides a new, fun perspective on graffiti allowing everyone to try and make their own stencil street art! BOOK HERE.

Women of the Colombian diaspora living in London share their experiences of peace and conflict through performances of spoken word poetry and dance. Organised by Conciliation Resources. REGISTER HERE.

Learn about how civil society manages the constraints imposed by conflict to contribute to building peace across Yemen, including building peace through street art, research on gender & youth, campaigning and community-based activities. Organised by The Sana’a Centre for Strategic Studies. No need to book.

Hear from young people from eastern Ethiopia – the Somali Regional State – about their experiences. When war broke out 25 years ago, many of them were forced to flee to the UK. Some haven't seen their families since. Now a peace deal has been signed, people have been able to visit their home country. The young people share their stories and their hopes for peace in this interactive discussion. Organised by Conciliation Resources. No need to book.

When Jesús Abad Colorado's family were murdered in rural Colombia, he bought a camera and dedicated the next 25 years to documenting the country’s civil war. In this film Jesús explores what it means to forgive the horrors of the past. Screening to be followed by a Q&A with the producer. Organised by Conciliation Resources. REGISTER HERE.

A fun and light-hearted moment to talk about how some of the best conversations and reconciliation happen over a drink. The idea here is to sit down and take a moment to talk over a beer, soft drink, coffee or tea – the session will be guided by Peace Direct. No need to book.

A pop-up culinary experience serving dishes from conflict zones. This year it features the cuisine of the Philippines, a three-course sharing meal will be created by Anglo-Filipino chef Mark Corbyn of London supperclub, The Adobros, in partnership with Eatwith. Organised by International Alert. BOOK HERE.

Watch performances by this eight piece Congolese dance band who play uplifting dance music called 'Cavacha'. 'Cavacha' is the core rhythm of Central African music that has given rise to ‘Soukous’ in the Democratic Republic of Congo, ‘Makosa’ in Cameroon and ‘Coupez Decallez’ in the Ivory Coast. Organised by Mercy Corps. No need to book.

Talking Peace Festival is this year brought to you by members of +Peace. +Peace is a coalition of 21 international peacebuilding organisations that is mobilising people, governments and the private sector to tackle global violence and division. The 2019 Talking Peace Festival represents the official UK launch of the coalition and is part of the global Peacebuilding Action Week.

Get our latest news, views and resources straight to your inbox, by signing up to our e-newsletter.
Sign up here.