Weak governance, an impoverished health service and a population with disproportionate health problems all increase the likelihood that the coronavirus pandemic could have a significant negative impact in Abkhazia. There is misinformation about Covid-19, limited access to protective equipment, and no infrastructure to enable deliveries of essential goods, other than by friends, family or volunteers. This is made worse by Abkhazia’s economic overdependence on tourism from Russia as months of travel restrictions between Russia and Abkhazia have caused economic stagnation and eaten up what little savings people may have had. The weak welfare system means many are suffering socio-economic hardship. There are multiple drivers for these problems, but the isolation resulting from decades of unresolved conflict is a root cause, hampering modernisation and development, and creating the potential for fault lines to emerge in a society strained by economic stagnation.

Several of Conciliation Resources’ long-term partners in Abkhazia – coordinated by Asarkia and the Center for Humanitarian Programmes and involving a wide network of volunteers and partners – saw the urgent need for support to vulnerable people affected by restrictions imposed to curb the spread of Covid-19. Together, they’ve undertaken a three-month project to distribute food and medical supplies to the most vulnerable in all regions of Abkhazia and to inform the public, supporting a more coordinated and inclusive official response. 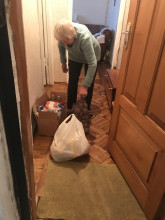 Supplies have been distributed to more than 2,500 vulnerable individuals across all of Abkhazia’s regions. The project has reached elderly people living in isolated rural communities, people with mental illness who had run out of medication, a blind man who lives alone, a woman fleeing domestic violence, and a deaf-dumb family who were totally cut off from sources of help. Project coordinators and volunteers have carried food parcels up countless flights of steps in high-rise buildings where the lifts don’t work, and have taken four-wheel drive cars to remote villages where no other aid had reached. They have also worked to counter misinformation about Covid-19 by regularly debunking information on Facebook and working to help inform public messaging from different sources, including the authorities.

In Tsebel’da village an elderly bed-ridden lady had no water, money, food, medicines or incontinence pads. There was no local transport and her carer walked 18 miles on foot to the local administration in Gul’ripsh for help but was told the local authorities had no funds and there was nothing that could be done. Under the auspices of this project, supplies were brought to the village, which the lady claims saved her life. 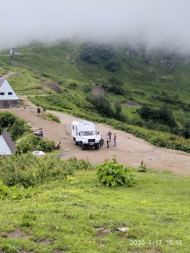 This was a new response mechanism so the project coordinators set up and ran a network of volunteers, liaised closely with existing social services and coordinated with officials, ICRC and others. They established cost effective ways to obtain and store supplies, and fair, transparent eligibility criteria for selecting beneficiaries for those supplies. Many people in Abkhazia do not have citizenship and so are missed off official government lists, and there are no comprehensive lists of vulnerable groups. As organisations with a long history working within communities, our partners were able to help collate information about those that needed support. Project partners identified a number of very vulnerable families with two or more individuals who have physical or mental disabilities or chronic illnesses, including cerebral palsy, epilepsy, Down’s syndrome and diabetes, but who receive no support. This would indicate there are more marginalised individuals who could not be identified within the short duration of this project. To address their needs, and work towards integrating them more in society, requires far more than the medical treatment and food supplies this project was able to provide.

As well as providing vital emergency support to vulnerable people, this work has important implications in the long term for civil society in Abkhazia. It has cemented relations between different civil society organisations, including a younger generation of activists, mobilised a network of volunteers across Abkhazia, and demonstrates the vital role of civil society in addressing community needs. Many of the project activities were run by women:

“Look at how much we do and how little it is valued. This project could give us, women, a lot of credibility in our society. This project has shown how well women work in crisis situations and we need to use this as a trampoline for more women to work in decision-making positions in Abkhazia.”

With travel restrictions currently lifted between Russia and Abkhazia, an influx of tourists may help improve the territory’s economic woes, but it also has the potential to provoke a worsening Covid-19 outbreak. More support is needed to provide food, essential supplies and medicine to vulnerable people. As one partner told us:

"Without further help some of these people will die.”

However, Abkhaz colleagues are clear that they also need to start thinking in the mid to long-term to develop an inclusive and functioning welfare system, based on comprehensive lists of vulnerable individuals and families and their needs, coordinating across sectors.

The strong relationships that underpin peacebuilding work in Abkhazia helped activists to mobilise. The full consequences of Covid-19 for conflict-affected areas such as Abkhazia remain to be seen, but this crisis response project draws further attention to the hardships provoked by unresolved conflicts and strengthens partners’ resolve to work toward a durable and just peace.

This project was funded by the Swiss Federal Department of Foreign Affairs, their speed and flexibility enabled rapid mobilisation and adaptation to cater to the most acute emerging needs.